Use our calculator to work out the estimated cost and charge time of your vehicle.

What is an Electric Car?

An electric car (or Electric Vehicle - EV) or sometimes referred to as a BEV (Battery Electric Vehicle), is a car powered solely by a battery that connects to an electric motor which, in turn, drives the wheels. In essence, for it to move, it needs to have power in the battery and that power comes from being plugged in.

Where Do I Charge It?

While the car will come with a charge connector that runs from the car to a domestic 3 pin plug, many people choose to take advantage of a government-subsidised home charger allowing you to charge your car at 7kw (much faster than on a normal plug). Supermarkets now typically have EV charging spaces, sometimes available for free while you shop and there is a growing network of publicly available charging points. A full map is available below. When you’re mid-journey, a rapid charger can charge your car back up to 80% in 20-40 mins.

They’re More Expensive To Buy - How Much Cheaper Are They To Run?

While electric cars are typically more expensive than petrol cars, the gap is coming down and are becoming more affordable for most people. The running cost savings are often underestimated, but our calculator above tries to demonstrate how little it can cost to run an electric car. Utilising overnight electricity rates and the occasional free charge, the savings can really mount up.

Do You Have To Pay Tax?

Switching to an electric car will undoubtedly save you money in tax. Whether that’s road tax or congestion charge zones, from which you're exempt in an electric car or company car tax, which in 2020-21 tax year also made you exempt from company car tax. In the next 2 years, company car tax rates will be 1% and 2% respectively, which is a fraction of what you’ll pay in a petrol/diesel car. Plus, VAT on domestic energy is only 5% rather than the 20% you pay in fuel duty. What's more, some local authorities also offer free parking for electric cars and the introduction of green number plates paves the way for schemes to allow EV drivers to use bus lanes or other incentives.

Is there a Government Grant Available?

A £1500 government grant is currently available on new electric cars with an MRRP up to £32,000. This is automatically claimed and administered by the dealer and already reflected in the price of the car.

Who Would You Recommend To Buy An Electric Car?

Electric cars aren't for everyone. If you’re regularly travelling long distances (250+ miles) and don't want to have to think about stopping to charge, then an electric car probably isn't for you… yet. If you don’t have off-street parking then relying on public charging can be a downside.  However, for the vast majority of people who may have an average commute or use their car like the majority of the UK, an electric car can offer a great driving experience and some significant cost savings.

With over 22,000 charging stations at 14,000 locations across the UK, there may be more electric car chargers near you than you might think. Plus with 500+ new chargers a month springing up, the infrastructure is growing fast.

Europe's first-ever fully electric estate car is now here in the form of the brand new MG 5 EV. With 214 miles of electric range and 578L of boot capacity, there's nothing else that compares on the market today. With a 52.5kWh battery, which charges to 80% on the growing network of rapid chargers in 45 minutes or fully charges in 7 hours on a 7kWh home charger. This entry level Excite variant comes equipped with all the mod-cons you need without bits you dont. In built Sat-Nav is displayed on the 8" colour touch screen multimedia screen which also houses Apple CarPlay and Android Auto. Finished in the crisp looking Arctic White, and sitting on 16" alloy wheels, the MG 5 really is something new for the UK market. 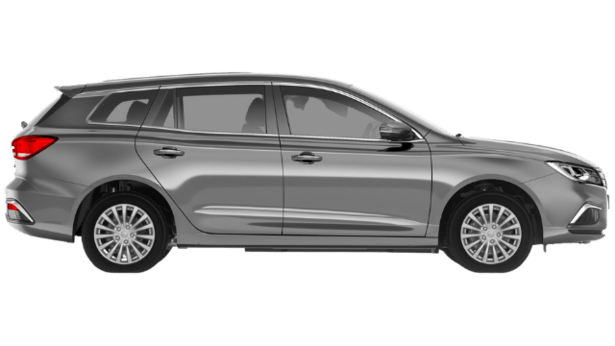 Calculate finance for this vehicle

* Mileage may increase as the vehicle may still be in use

Service History (Not yet required)