Use our calculator to work out the estimated cost and charge time of your vehicle.

What Is A Plug-in Hybrid?

A Plug-in Hybrid Electric Vehicle (often shortened to PHEV) is in many respects similar to a normal hybrid, in that it combines an Internal Combustion Engine (ICE) and an electric motor, powered by a battery. As the name suggests, the main difference is that the main source of the battery’s power comes from plugging it into an electricity supply.

What Are The Benefits?

Most PHEVs give you the ability to travel reasonable distances on electric-only power, typically enough for a short commute or the first section of a longer journey before the battery is drained and the engine takes over. This means if all your journeys are shorter than the full electric range of the car, you may be able to run on electric power only, slashing your running costs to a fraction of petrol or diesel. Unlike a full EV where the battery is the sole source of power, you have the flexibility to continue your journey using petrol, meaning finding a charging point is advantageous, but not necessary

Where Do I Charge It?

While the car will come with a charge connector that runs from the car to a domestic 3 pin plug, many people choose to take advantage of a government-subsidised home charger allowing you to charge your car at 7kw (much faster than on a normal plug). Supermarkets now typically have EV charging spaces, sometimes available for free while you shop and there is a growing network of publicly available charging points. A full map is available below. When you’re mid-journey, a rapid charger can charge your car back up to 80% in 20-40 mins.

How Long Does It Take To Charge?

The length of time it takes to fully charge your PHEV depends on a couple of factors but primarily it depends on whether you’re using a ‘slow’, ‘fast’ or ‘rapid’ charger. Use our handy calculator above to work out how quickly and how cheaply you could charge this car.

Is a PHEV ULEZ and Congestion Charge Exempt?

All PHEVs are ULEZ compliant and until October 2021, all PHEVs emitting under 75g/km CO2 will be congestion charge exempt saving you £15 a day if you drive in central London.

Most PHEVs can travel over 30 miles on pure electric power with the rest of the journey being powered by the engine. The WLTP test figures quoted are based on a rolling road in lab conditions, but if you assume that your weekly commute is done mostly on electric power, your overall MPG will be determined by your proportion of electric to petrol mileage. Therefore, depending on your mileage profile, averaging way over 100 MPG is very much achievable.

Who Would You Recommend To Buy A PHEV?

A Plug-In Hybrid is a great option for people who get the benefit of electric car driving for commuting to work or short journeys where they can realise a huge saving in running costs. Where an electric car may be unsuitable due to the frequency of longer trips or availability of local charging points, a PHEV allows you the best of both worlds, with short journeys on electric power and longer journeys using the petrol engine.

With over 22,000 charging stations at 14,000 locations across the UK, there may be more electric car chargers near you than you might think. Plus with 500+ new chargers a month springing up, the infrastructure is growing fast.

Luscombe Motors are extremely proud to be able to offer this all New Suzuki Across. This new Suzuki is the brand’s first plug-in hybrid vehicle – Essentially, the Across is a rebadged version of the Toyota Rav4 – and it forms part of our brands’ recently confirmed partnership that will ultimately see Toyota develop a new hybrid vehicle for Suzuki., with Suzuki fitting a new front and rear bumpers, fresh projector LED headlamps and some tweaked taillights. Buyers also get a set of 19-inch alloy wheels and a choice of six different paint finishes.

Inside, the new Suzuki Across features a multifunction steering wheel, air conditioning and a nine-inch touchscreen infotainment system, which offers support for Apple CarPlay and Android Auto. There’s also a range of storage bins and cup holders scattered throughout the cabin, as well as an electrical accessory socket mounted in the SUV’s 490-litre boot.

The Suzuki Across is powered by a plug-in hybrid powertrain, which comprises a 2.5-litre four-cylinder petrol engine, an 18.1kWh lithium-ion battery pack and an electric motor mounted on each axle. Combined, the system has an output of 180bhp and 270Nm of torque – which offers a 0–62mph time of six seconds flat.

Suzuki says the Across will also return up to 282mpg on the WLTP cycle, while only generating 22g/km of CO2 – which places it in the lowest UK road tax bracket. What’s more, the SUV’s powertrain is capable of running for around 47 miles on pure-electric power alone.

the Across’s powertrain sports an independent rear electric motor, which can vary the torque between the front and rear axles in any combination of ratios ranging between 100:0 and 20:80. this gives the Across better stability on slippery surfaces, as well as improving the SUV’s cornering ability.

The Across’s PHEV powertrain also comes with a range of driver profiles, which allows the SUV to operate in either hybrid or fully-electric mode. There’s also an extra setting which holds the battery’s charge level for use later in the journey, as well as a battery charger mode which can top-up the battery pack without the need to visit a charging station.

Finally, there’s a Trail setting, which will manipulate the car’s differential and braking system to provide the best performance off-road. The system automatically sends power to the wheels with the most grip – and brakes the wheels that are losing traction – while adjusting the throttle and gearbox shift pattern to keep the Across moving.

Buyers get a wealth of safety equipment, too, including pre-collision assist, lane-keeping assist, road sign assist and a blind-spot monitoring system. There’s also a rear cross-traffic alert system and an active cruise control system, which can automatically control the SUV’s throttle and braking in stop-start traffic. 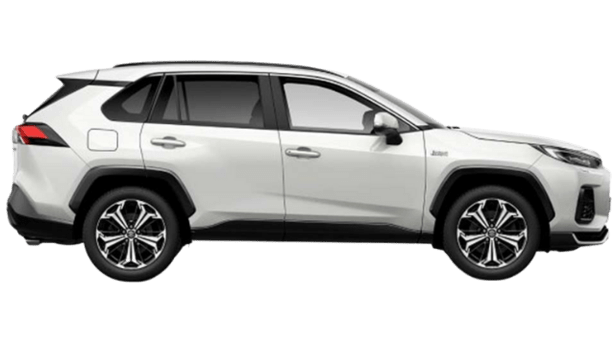 Service History (Not yet required)